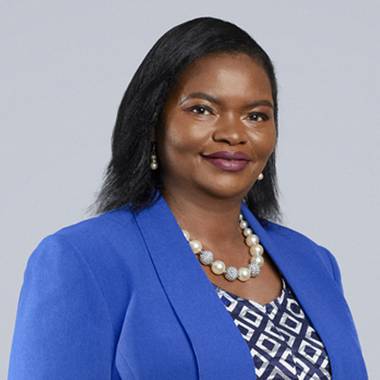 Chemistry - Laureate for Africa and the Arab States

Professor Catherine Ngila is awarded for her groundbreaking contribution to water quality and water resource management in Africa. Her entrepreneurial flair and enquiring scientific mind have seen her pioneer nanotechnology-based analytical methods for monitoring and removing industrial water pollutants, creating a major positive impact by enabling millions of families to benefit from safer drinking water.

Her beginnings in Chemistry

Professor Ngila persevered with her studies, encouraged by her father, a former tribal chief (her mother passed away when she was a young child). She had the good fortune to study at an all-girls secondary school, free from gender stereotypes, and here, her interest in chemistry blossomed, inspired by her chemistry teacher. She later graduated as the top student at Kenyatta University’s science faculty in 1986, where she began pursuing her interest in water resource management.

With universities and laboratories in her native Kenya facing funding, resource and infrastructure challenges, Professor Ngila continued her research in Australia, where she obtained her doctoral degree from UNSW in 1996 before returning to Kenya to lecture at Kenyatta University, and later in Botswana and South Africa.

At the University of Johannesburg, she experienced a major ‘Eureka’ moment by using electro-spinning cellulose to extract individual nano-fibers. This had previously been thought impossible, as cellulose is restricted by its limited solubility in common solvents and inability to melt, preventing the separation of such fibers. Professor Ngila and her doctoral student Stephen Musyoka overcame these challenges by applying a high voltage electric field to a modified cellulose solution, producing biopolymer nano-fibers with diameters in the range of 100-500nm – and delivering a high impact approach for water purification.

“Water research is close to my heart in that, water is life! Nanotechnology can play a vital role in water purification techniques. My dream is to produce a commercially viable water nano-filter that removes contaminants in one filtration cycle, enabling rural African families to install affordable water filters in their homes.”

The place of women in the scientific field

As a senior woman scientist in Kenya (where just five of the 31 public universities have women vice chancellors), Professor Ngila has found it hard to break the glass ceiling, often finding herself sidelined by male counterparts in decision-making. The ‘multi-tasking’ burden faced by senior women scientists – conducting research while acting as role models and being the ‘token woman’ on multiple boards and councils – also undermines their ability to flourish personally and professionally.

“Excellent science and innovation require the talents of both women and men. We need the complementary skills and values of both genders to create a balanced, holistic approach to leadership.”

It may even result in reinforcing their sense of isolation and exclusion from laboratory working culture, which in turn limits their career opportunities. In some cases, it can leave women susceptible to harassment. Despite this, she remains undeterred in her conviction to fight gender discrimination.