Nov 10, 2019, Shanghai - The second edition of the China International Import Expo (CIIE) has come to a successful close after 6 exciting and eye-opening days. L’Oréal, the biggest “household chemicals” exhibitor at the first two editions of the Expo and vice chairman of the CIIE Enterprise Alliance, confirmed as early as on Nov 6 that it would also participate in the next edition of the CIIE.

Fabrice Megarbane, President and CEO of L’Oréal China, said: “Participating in the CIIE is an honor for us, as it gives us the opportunity to breathe the same air as China, share a common destiny with China, and grow and develop together with China. The second Expo has proven to us even more resoundingly that the ‘China Opportunity’ is an opportunity for the entire world. The future of China is that of ‘great seas and big fish’. The seas will become even more open, and provide the room for even more growth and success. These are seas bountiful with opportunities, and where enterprises seeking innovation and development will find themselves very much at home.” 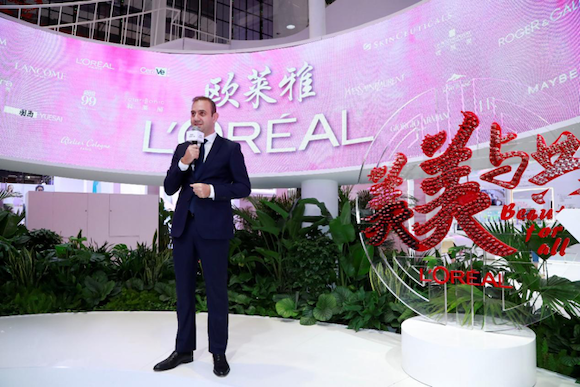 This year marks the 70th anniversary of the founding of the People’s Republic of China. L’Oréal believes that one of China’s greatest achievements in these 70 years is the cultivation of a massive market of some 1.4 billion consumers, a market which has in turn generated abundant demand. Today, various nations around the world are in pursuit of the transformation of their economies, and China successfully set a model for economic reform and transformation with its shift from infrastructure- and investment-driven growth to growth that is instead driven by consumers and innovation. The success of this farsighted move towards transformation has made China the top engine of growth in the world: on average, China accounts for nearly 30% of the world’s economic growth each year. Consumption is becoming the “golden key” to a “new golden age” for China’s economy, and the CIIE has provided the world with another excellent opportunity to partake in the China Opportunity.

For this year’s Expo, with the theme of “Bring the Best of the World’s Beauty to Everyone of You” and a focus on three key phrases ("New Consumption”, “New Technologies”, and “New Value”), L’Oréal has created the largest, multidimensional popup experience of “New Consumption”. It was also the only consumer goods and services company to have a “three-in-one” presence in three exhibition zones: the “6.1H Quality Lifestyle Exhibition Zone”, the “6.2H High-End Consumer Goods Exhibition Zone”, and the French Pavilion.

Over the last few days, hundreds of thousands of visitors thronged L’Oréal’s exhibition spaces at the Expo. Two highly distinctive makeup brands -- the value-for-money professional makeup brand NYX Professional Makeup, and Urban Decay, the first indie makeup brand to go global -- drew plenty of attention and chatter in what was the run up to future market launches; on the other hand, a number of innovations that embodied the very best of beauty and technology also became hits at the event. These products include: SkinCeuticals’s Custom D.O.S.E device (showcased in mainland China for the very first time); the “Scalp Hair Multi-Functional Intelligent Detection Application” by Kérastase (unveiled for the first time in the world); the “Skin Genius” mobile skin analysis app (shown for the first time in Asia); La Roche-Posay’s “My Skin Track”, a portable skin environment sensor that does not need batteries to run (mainland China debut); and Style My Hair, the world’s first dynamic hair color simulation application. 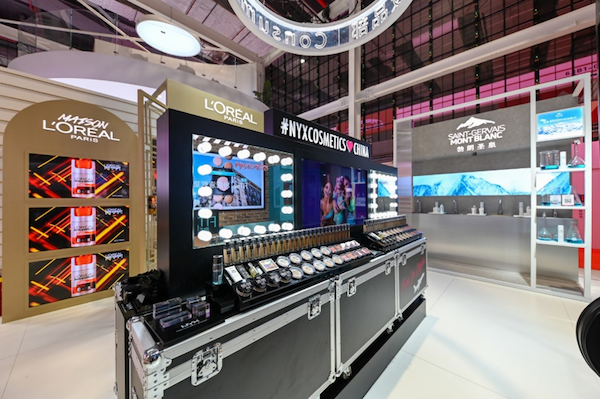 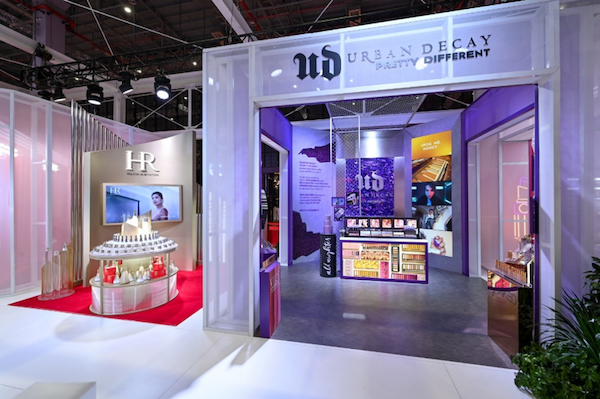 Urban Decay: the beauty brand with the greatest influence on social media in America

Over a thousand visitors “checked in” for their “beauty confessions” at L’Oréal’s “Ring of Confession” in the 6.1H exhibition zone, and over at the 6.2H exhibition zone, world-class immersive experiences such as Lancôme’s “Absolue Rose Exhibition”, Armani Beauty’s “Armani Box Cinema Theme Pop-Up Store”, and the Kiehl’s “Made Better Green Planet Project Immersive Art Exhibition” also became landmarks within the exhibition zone. The “Sustainable Development Zone”, which focused on the use of green packaging in e-commerce and the story of how China became a “zero-carbon market” for L’Oréal was a “dark horse” that also drew a large number of visitors concerned with the future of Mother Earth. 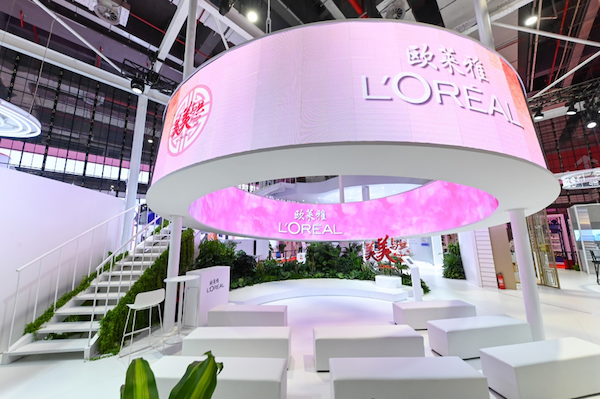 The eight-meter-wide, three-meter-tall “Ring of Confession”, where visitors checked in for their “beauty confessions” 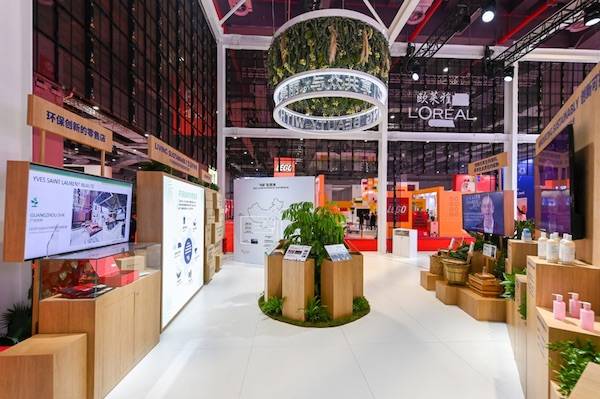 According to a report by the World Bank, China has jumped 15 places this year to the 31st place in a ranking of business environments around the world. L’Oréal has witnessed the improvements China has made with its reforms and to its business environment over time, and has also been a participant in, and beneficiary of, such improvements. In particular, over the last few years, with the introduction of a number of new policies on various fronts, L’Oréal has been able to grow together with the China market, share in the massive dividends generated by the reform and opening up of the China market, and achieve substantive and healthy development in the process. China has become the second-largest consumer market, second-largest makeup market, and largest trading nation in the world. L’Oréal has also become the largest player in China’s makeup market. In turn, the China market is also the group’s second-largest market in the world. Last year, L’Oréal China achieved its biggest-ever two-digit growth figure in the last 14 years: 33%. The China market has continued to turn in a strong performance in the first half of 2019, and has helped to make the Asia Pacific region the L’Oréal group’s largest regional market.

Prior to the Expo opening ceremony, Jean-Paul Agon, Chairman and CEO of the L’Oréal group, was part of a delegation of representatives from the world’s Top 500 companies who met with President Xi Jinping. Then, later that day in the afternoon, he attended the Hongqiao International Economic and Trade Forum, where he spoke at a panel titled “The Digital Age and Innovation and Development in the Area of E-Commerce”. There, he made the observation that digital technologies and e-commerce do not merely provide a boost to consumption but also provide the drive for further innovation that in turn improves lives. Further, digital technologies and e-commerce are also driving the transformation of the Chinese economy into one that is consumption-driven, centered on the consumer, and human-oriented. Today, China is not just another market but a veritable touchstone for technologies from around the world. It has also become a new hub of research and innovation, and test bed for a better future. 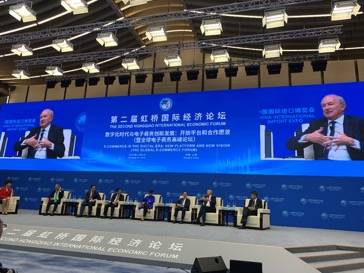 Jean-Paul Agon, Chairman and CEO of the L’Oréal group

“Chinese innovation is becoming an inspiration for the rest of the world, and China is already a key engine in L’Oréal’s efforts to transform itself and become a ‘global leader in beauty tech’. A growing number of innovations from China have ‘set sail’ and opened up new channels for the future development of the global beauty industry.” Said Agon: “Compared to the rest of the world, Chinese consumers are more familiar with digital technologies. The level of professional competency is also higher. We believe that L’Oréal  China will be able to stand at the forefront of beauty tech developments around the world, and that Chinese consumers will be the first to welcome an even better future made possible by beauty tech.”

“As a classic ‘glocalized’ corporation guided by its philosophy of “Beauty for All”, L’Oréal will continue to stand firm in China and seek to further embed China into the world’s consumer production chain, innovation chain, value chain, green-development chain and global-citizen chain in the realm of beauty. L’Oréal will continue to lend support to China as it seeks to reach new heights in the context of the global business environment and work together with China to inject even more vitality into efforts to establish global economic development on a trajectory that is even more open, more inclusive, more broad-based, more balanced, and which benefits everyone. Further, L’Oréal will seek to share with people from China and around the world alike the ‘CIIE dividend’ and the ‘China Opportunity’ as we strive towards an even better life,” said Agon.