The 30 brilliant laureates for this year L’Oréal-UNESCO For Women in Science’s France fellowship programme, were celebrated on Monday 8th October 2018 in Paris, during a ceremony held at the Palais de la découverte.

These doctoral and post-doctoral researchers join more than 280 other female scientists supported by the Foundation each year, in over a hundred countries. They were granted a research scholarship to support them in the pursuit of their researches, and they have benefited from a leadership training session, complementary to their scientific career, giving them the means to break the glass ceiling.

“This commitment in favor of women in research corresponds to two L’Oréal key values: scientific excellency and innovation, as well as the promotion of equality between men and women”, said Hervé Navellou, General Manager of L’Oréal France, who co-hosted the ceremony with Alexandra Palt, the Executive Vice President of the L’Oréal Foundation.

During the ceremony, held in presence of 200 guests, amongst who a great number of scientific prestigious figures, the 30 laureates were awarded their diploma by eminent specialists of their research fields, members of the Académie des sciences jury or experts. 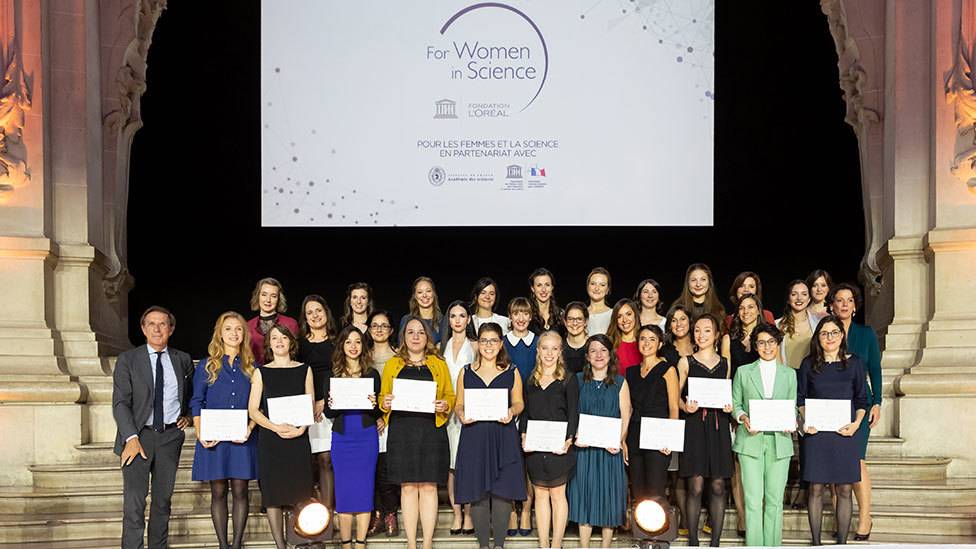 A commitment more than ever necessary

While last week two women were awarded a scientific Nobel Prize, Donna Strickland in physics, and France H. Arnold in chemistry, there is still a lot to be done to achieve equality between men and women.

“If this recognition must be applauded, we know very well that the road to gender equality in research is still long. These two women awarded in 2018 hardly change the statistics. To be precise, since the creation of the prize, the proportion of scientific Nobel prize awarded to women went from 3 to 3.4%”, indicated Alexandra Palt in the ceremony opening speech.

A number insufficient and “revolting” for three quarters of the French people according to a poll conducted by the L’Oréal Foundation with the Opinion Way Institute.

This poll reveals that, while statistics of the number of women in research evolve very slowly, the public opinion, on the other hand seems to become more and more aware of the importance of the matter. Indeed:

“Here at the L’Oréal Foundation, we consider that supporting women’s place in research is fighting for more equality. It is also giving ourselves all the chances for scientific innovations that will be beneficial for all, because the under-representation of women in scientific teams impacts the research’s quality” also highlighted Alexandra Palt.

Examples are numerous; some are well-known, like the less efficient prevention and care for women developing cardiovascular diseases. Others are more recent, like the reproduction of gender stereotypes by translation algorithms and image or vocal recognition in Artificial Intelligence; field in which there is only 18% of women. Furthermore, it is now established that the efficiency of the teams and their innovation capacity increases with their capacity of being diverse and inclusive.

Since its creation twenty years ago, the L’Oréal-UNESCO For Women in Science programme has revealed and supported 3100 women scientists in the world. Because the world needs science and science needs women.